Run For You Leadership 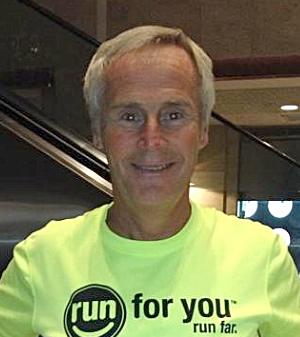 Many years ago, a good friend gave Joe a running shirt with the saying on the front: “Joe lives for running”.  While that may be stretching it a bit, there is no question Joe loves running! He loves running itself, talking about running, and most of all helping others catch the passion for running – that passion that provided him with so many benefits over the past 40 years.

His adult running career started innocently enough with a United Way Corporate Cup 5K here in Charlotte in 1982.  Like many beginner runners, that first 5K was hard and was not the best of runs.  Yet, the spirit, camaraderie, and competition of that race triggered a passion that would drive Joe to cover over 225,000 logged miles of training and racing since that first 5K.  He has raced just about every distance from 5Ks to marathons to ultramarathons (50Ks, 50 miles, 100 miles, 24 hour, and multiday races).  The longer the distance, the better! Yes, Joe loves running.

To date, Joe has completed 238 marathons (PR of 2:40:15) and 176 ultramarathons (distances over the marathon).  His running of the 2013 Umstead 100 mile race was his 46th 100 mile finish.  Joe really enjoys running on both the road and the trails.  His favorite trail race is the Western States 100 which he finished 12 times, 6 of which were top 10 finishes.  His favorite road race is the Boston Marathon and 2022 was his 22nd Boston Marathon.  Joe is one of the few runners who have survived Badwater, a 146 mile race from Badwater in Death Valley, CA (lowest point in the continental US) to the top of Mt. Whitney, CA (the highest point in the continental US). But his passion for running doesn’t end with his personal running.  Joe’s current goal is to run a marathon on all 7 continents and hopefully will complete this goal in October in Cape Town, South Africa.  This will be the final of 7 as in January 2022, he completed the Antarctica marathon.

Over the years, Joe has informally coached many runners. Thirteen years ago, Joe was asked to coach distance running at Piper Glen, an opportunity that was just what he was looking for. Joe is an RRCA (Road Runners Club of America) Certified Distance Running Coach.  The joy of seeing runners achieve their running dreams is what now keeps Joe’s passion for running alive and burning.  This year, Joe is a driving force behind the Run For You running programs.  He certainly knows how to Run Far, but more importantly to pass on that knowledge and passion to others.  Joe loves running…just ask him!

Run For You Benefits

• Run For You performance t-shirt

• A program that makes running fun, safe, and rewarding!