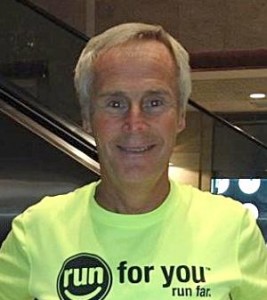 A few years ago, a good friend gave Joe a running shirt with the saying on the front: “Joe lives for running”.  While that may be stretching it a bit, there is no question Joe loves running! He loves running itself, talking about running, and most of all helping others catch the passion for running – that passion that provided him with so many benefits over the past 36 years.

His adult running career started innocently enough with a United Way Corporate Cup 5K here in Charlotte in 1982.  Like many beginner runners, that first 5K was hard and was not the best of runs.  Yet, the spirit, camaraderie, and competition of that race triggered a passion that would drive Joe to cover over 200,000 logged miles of training and racing since that first 5K.  He has raced just about ever distance from 5Ks to marathons to ultramarathons (50Ks, 50 mile, 100 mile, 24 hour, and multiday races).  The longer the distance, the better! Yes, Joe loves running.

To date, Joe has completed 184 marathons (PR of 2:40:15) and 173 ultramarathons (distances over the marathon).  His running of the 2013 Umstead 100 mile race was his 45th 100 mile finish.  Joe really enjoys running on both the road and the trails.  His favorite trail race is the Western States 100 which he finished 12 times, 6 of which were top 10 finishes.  His favorite road race is the Boston Marathon and 2018 was his 18th Boston Marathon.  Joe is one of the few runners who have survived Badwater, a 146 mile race from Badwater in Death Valley, CA (lowest point in the continental US) to the top of Mt. Whitney, CA (the highest point in the continental US). But his passion for running doesn’t end with his personal running.

Over the years, Joe has informally coached many runners. Ten years ago, Joe was asked to coach distance running at Piper Glen, an opportunity that was just what he was looking for. Joe is an RRCA (Road Runners Club of America) Certified Distance Running Coach.  The joy of seeing runners achieve their running dreams is what now keeps Joe’s passion for running alive and burning.  This year, Joe is a driving force behind the Run For You running programs.  He certainly knows how to Run Far (and some would say Fast), but more importantly to pass on that knowledge and passion to others.  Joe loves running…just ask him! 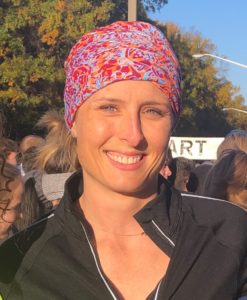 I joined the RFYL group in 2018 when I decided to train for my first full marathon.  Until then, running had mainly served as a stress reliever over the years between playing other sports, having kids, and navigating life.  I was the typical soccer-mom training for the fundraiser 5k.  I pushed myself to run a half marathon because I needed a goal that depended mostly on me, to do for myself- we all know no one else can run the race for you!  Hardly believing I would be able to complete it, I surprised myself with my time and decided to try it again knowing that it wouldn’t actually kill me.  Once I had a few half’s under my belt, a loved one encouraged me to try a full.  I said, “Oh, my joints won’t hold up to that.  And even if they did, I’d never have the time to train.”  When I decided to run Marine Corps in memory of that loved one, I knew I’d need the support of a group.  Having trained alone prior to that, I had no idea how powerful a group could be!  Sometimes I still can’t believe I’m “a marathoner.”  In the Speed Demons, I have had the privilege of running with each of the coaches and they are truly remarkable people.  I have made life-long friends, learned a ton about racing, training, and nutrition, and learned the roads of Piper Glen like the back of my hand!  Nothing inspires me more than watching someone realize their potential, so please let me know how I can support you.  You can count on me to geek out on some tedious detail to help you pass the miles! 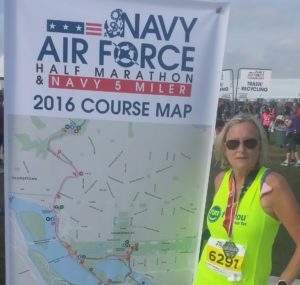 I joined the PGSD group approximately 5 years ago after running a few 5Ks and 10Ks with the goal of running a half marathon. What I found with this group is total support and encouragement with each step of my training. I loved showing up for running sessions and meeting new people that shared similar goals. My first half marathon was the Navy-Air Force Half Marathon in Washington, DC.

Last year, I was given the opportunity to coach the Mellow Milers, the 12:01-13:00 pace group. Wow….what a great experience. I loved getting to coach and train with others and see others achieve their goals.

PGSD is a fabulous running group. No matter what your pace and/or status of training, this is the best group. Everyone is so supportive of each other and I am thrilled to be a part of this group! 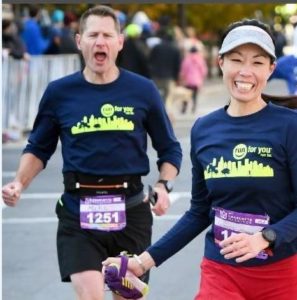 A life-long runner managing the familiar dilemma to balance life and a passion to run. There were seasons of opportunity to set a goal, train, and to enjoy an occasional race with family in tow. Children grown, a new season started, and Mike started running regularly with the Piper Glen “Run For You” group in 2016. There have been many highlights over more than 30 years of running and racing around the world. The first Boston qualification stands out as the most memorable. Since joining the Piper Glen running family, highlights occur weekly. The privilege of supporting runners in setting and achieving goals is as big a highlight for Mike as is reaching his own. Since joining the Piper Glen Speed Demon Team, Mike has set his own marathon PR, 22 years after completing his first marathon (never too late to learn and improve). RRCA (Road Runners Club of America) Level 1 coaching certified 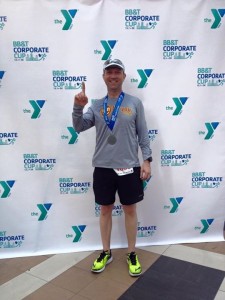 Before Jeremy joined the SpeedDemons, he trained alone on the greenway, suffered through one marathon, and saw no progress in half marathons. Since joining the SpeedDemons, he cut over 15 minutes off his half marathon PR (1:42), and almost 40 minutes off his full marathon PR (3:46), completed 70.3 ironman triathlons, learned to love hills and love speed work, and LOVE his SpeedDemon family. Jeremy is a big advocate of cross-training (swimming and biking especially), and looks forward to coaching SpeedDemons to sub-2:00 half marathons and sub-4:00 full marathons in 2020. #LaceEmUp #TimeToRun 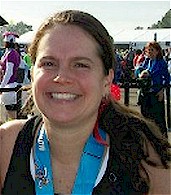 My family and I moved to Charlotte from Syracuse, NY in July of 2010. Although I was not a “runner” then, I was enticed by the “Real Life Forrest Gump” aka Joe Schlereth to join the best running group in the south – Run For You, Piper Glen. My goal was to be able to run through the Disney parks, “just once” (I normally skip through.) I signed up for my goal race – the Disney Half Marathon to be run in January, 2011. Somehow, I ended up running a full marathon prior to that signature race. It may have something to do with the power of the group, the magic of the speed demons of Piper Glen, or the family of cheerleaders I have for support. That was over six years ago. Since that time, I have run 12 full marathons and 24 half marathons. I am so excited to coach again this year and share my passion with others. I am hoping you will find “Run for You” to be not only the best way to train for a marathon, but the only way!!! 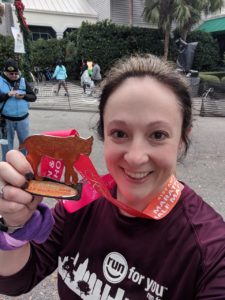 In October of 2012 at the age of “thirty-something” I decided I wanted to run and train for a 5k.  I did some searching and found the Run Fit group at the South Park RFYL. That December I ran my first 5k, and the following October I did something I always said I’d never want to do which is run my first half at the Myrtle Beach Mini!  Since then I’ve run numerous half-marathons, usually one or two a season, and in December 2018 I ran my first full marathon at Kiawah!  In October 2019, I conquered the Marine Corps Marathon, and in 2020 I plan to run the Myrtle Beach Marathon and either Chicago or Berlin.

I love running, and I love the RFY group because it’s not just a training session, but it’s time well spent with people who support both your run goals and your life goals!  RFY is truly a run-family!

I look forward to the next season! 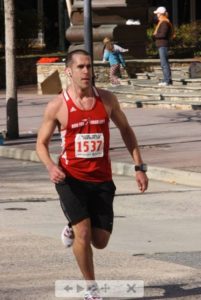 I’ve been part of the Speed Demon group since 2013, the year my wife and I ran our first marathon in Chicago. Over the next six years, I’ve completed 10 more marathons, a 50k ultra marathon, and a whole bunch of shorter races. The races are fun, but what I really enjoy is the training in and of itself, and conquering all the various workouts. Meeting with other Speed Demons several times a week who are in the same boat, doing the same workouts, makes it that much more enjoyable. As a new coach for the 2020 season, I’m really looking forward to helping other runners improve their conditioning, achieve their goals, and have a lot of fun along the way. 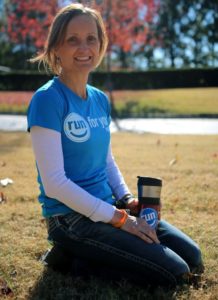 My pace group is called the Battle Buddies!  We put a lot of miles on the streets together, and sometimes you need a friend to pull you through them!

I started running seriously in 2011 with my first half marathon in Charlotte.  I joined the Speed Demons in 2014 – after joining this amazing group, and along with the training plan, speed work, and a few hill repeats, and lots of new friends, I cut 25 minutes off my time from my first and second marathons!  Since then, I have now run almost 20 half marathons, 11 full marathons and marathon 12 will be in Scotland in May 2020! 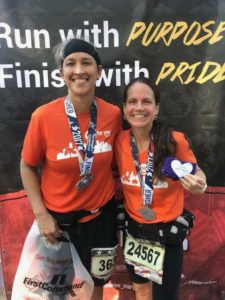 My friend, Tara Daley told me about RFYL training programs in 2013 and I thought anyone that ran 18 miles at one time was crazy. Not much has changed about that opinion since 2013, but now I run those long miles with her.

I moved to Pineville in 2014 and since RFYL was right down the road and we start in the early morning I could get my workouts in before work. I haven’t always been a runner. Running is something I’ve had to work at. The best thing about RFYL training program is that I get to do the hard work with others. If my buddies can get through it, I know I can too. 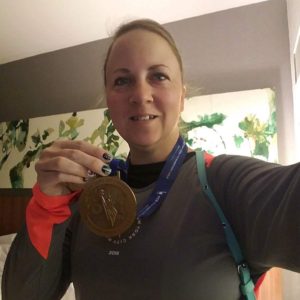 Kim started running in 2011 with the goal of running a 5k. She got bitten by the running bug and started training for a half marathon. One turned into 60+ over the years, and became her favorite distance to run. She has also run 4 marathons.

Kim runs in Disney at least once a year and ran her first 2 marathons there.  She began sharing her love for running with girls as a Girls on the Run Coach and has been coaching there for 5 years.

After she moved from NJ to SC in 2016, Kim found the PG Speed Demons through the recommendation of a friend and trained for the NYC Marathon with them, while getting her RRCA Coaching certification.

She has mentored adult runners in the past and looks forward to coaching, so she can share her addiction with others!

Don't Be Shy. Get In Touch.

If you are interested in working together, send us an inquiry and we will get back to you as soon as we can!